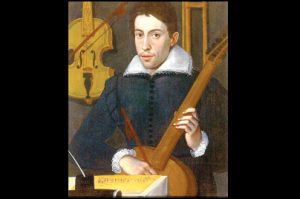 Claudio Monteverdi (1567-1643) was probably one of the first composers to show signs of being an “artist” rather than just a skilled craftsman. Contemporaries admonished some of his music for being too innovative, breaking with tradition. His landmark contributions to music include a large number of madrigal song books; the first full-scale opera L’Orfeo (1607), based on the Ancient Greek story “Orpheus and Eurydice” with an instrumental ensemble resembling what will become the modern orchestra; and the first large-scale religious works for soloists, chorus and orchestra, the most famous being Vespro Della Beata Vergina (“Vespers to the Blessed Virgin”) published in 1610.