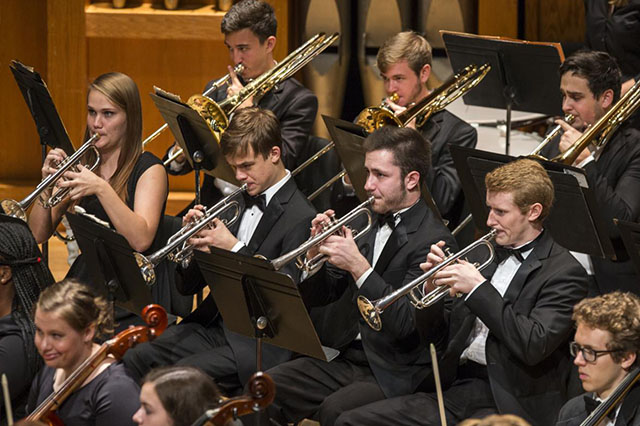 The brass instruments are some of the most powerful instruments of the Western orchestra. The use of brass instruments varies depending upon the intentions and needs of the composition. Despite popular misconception that brass instruments don’t appear regularly in orchestral music until the 19th century, their use begins in the early 17th century with the large-scale works of Claudio Monteverdi (1567-1643). The sackbut (the ancestor of the trombone) and the cornetto (ancestor of the trumpet) were used throughout the 16th century. Monteverdi’s early operas and some of his large-scale religious works incorporate both woodwind and brass sections. That said, the use of brass instruments as regular members of the orchestra probably begins in the late classical and early romantic periods, circa 1800.

Also, young composers often believe that brass instruments are sluggish, slow, and loud. Even good trombone and tuba players can perform with surprising agility. Certainly, playing fast arpeggios at an allegro tempo is probably not idiomatic for these instruments (as for strings for example), however they can play step-wise music at relatively fast tempi.

Brass instruments as a section are known for their large powerful fanfares, mostly known in the music of Wagner and Mahler in the mid-to-late 19th century, but similar fanfares were composed by Jean-Baptiste Lully as early as the mid-17th century in the court of King Louis XIV of France. At the same time, brass instruments can also play legato and pianissimo. Explore the brass instruments and see the many different capabilities and sound colors.

Expand All | Collapse All
Instruments Status
1