The Sorcerer of Beyreuth: Richard Wagner His Work and His World by Barry Millington 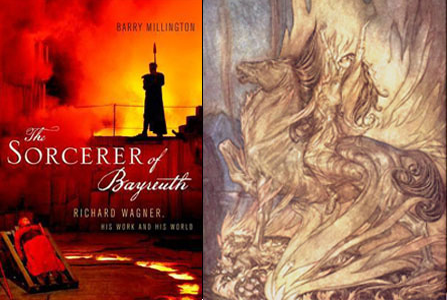 Since late in high school, I’ve been a Richard Wagner-enthusiast, sometimes referred to by that slightly condescending term Wagnerian. However, many Wagnerians admit that what we mean is that we’re enamored with Richard Wagner’s music, not necessarily his character, mainly his ego. Wagner’s ego would give the likes of Elon Musk a run for his money.

The Sorcerer of Bayreuth by Barry Millington is one of the better biographies of Wagner who is not an easy subject to tackle at the line of scrimmage. While much of his music has a transcendent and in some cases an almost ethereal quality, especially the preludes to Tristan und Isolde and Parsifal, Wagner the man was sort of like an unmerciful American football linebacker, the Lawrence Taylor of artists. He was a crass and vindictive German who happened to write great music. He made no bones about his anti-Semitism, and yet so much of the themes of his operas dealt with the redemptive power of love.

Unlike Wagner’s own autobiography which ends when Wagner was rescued by the most zealous member of his fan club, the young (and mad) King Ludwig of Bavaria, Sorcerer focuses mainly on Bayreuth and the operas produced under the youthful king’s patronage. While it is often typical to treat each composer individually in music history classes at universities, Millington lays the groundwork that Wagner was in the midst of a cultural revolution of sorts.

Fascination with ancient and medieval history and culture had become a mainstay in mid-to-late 19th century Middle and Western Europe. Figures like Madame Blavatsky (1831-1891) were obsessed with mythological and ancient sensibilities. The subject of Wagner’s operas are often medieval, especially those performed at Bayreuth under King Ludwig. The four-opera Ring cycle in particular, premiered about 80 years before the publication of J.R.R. Tolkien’s The Lord of the Rings, would not have been possible without the king’s patronage.

Many of the stories about the operas and Wagner’s relationship with Ludwig are chronicled in Millington’s biography. If there’s anything I gleaned from this biography of Wagner, it’s that Wagner’s story, from revolutionary, to fugitive, to a king’s favorite is like a Wagner opera: it’s a fairy tale. And always be aware that playing Wagner on a tuba does not necessarily make the instrument a Wagner tuba!